Selling in the dark: Information asymmetry in the informal waste ecosystem 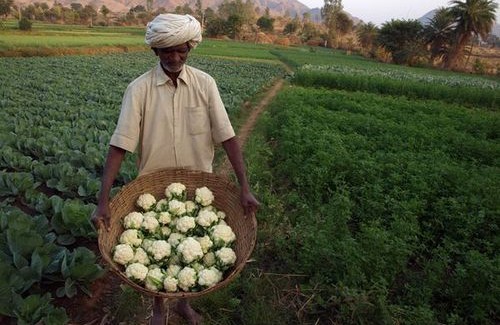 As a general rule the most successful man in life is the man who has the best information.
– Benjamin Disraeli

This picture taken 11 October, 2007 shows an Indian man searching through garbage for scrap at a landfill site in New Delhi. An estimated 300,000 waste collectors — known as ragpickers here — rifle through the city’s unsegregated rubbish to pick up metal and plastic which they sell on to recycling units. AFP PHOTO/ Manpreet ROMANA (Photo credit should read MANPREET ROMANA/AFP/Getty Images)

Learning from the experiences of the Agricultural Sector:

What do Indian farmers and ragpickers have in common? At face level, both groups couldn’t be more different: one group’s livelihood is based on producing crops, while the other’s is based on earning a living by salvaging waste. But interestingly, both of these groups work in sectors with unjust structures.

Consider some statistics: according to a report published by the National Sample Survey Organization (NSSO) in 2013, the average monthly income of an agricultural household is 6,426 Indian rupees (roughly $101). Dr Rahul Singh, from the Birla Institute of Management Technology, estimates that Indian ragpickers earn anything between 45 to 80 rupees (just around a dollar) in a day—an average of 1,875 rupees ($30) each month. In both sectors, however, the final product is worth much more at the higher end of the supply chain. The product is traded for much more than what the farmers and ragpickers receive.

There are a couple of reasons for unequal distribution of profits. One reason is that the workers don’t have equal access to crucial information about the market.

In technical terms, this is referred to as “information asymmetry”. Economist Joseph Stiglitz explains the concept as a “situation where some party in a transaction benefits from having preferential access to information.” This, he says, leads to power imbalances in market transactions.

Information asymmetry can exist across different industries and verticals. In India, it is particularly prevalent in the agriculture sector. A recent report describes the disconnect that exists between the industry’s multiple activities which include planning production, growing, harvesting, packing and transport, among others. This disconnect can lead to increased transaction costs, market friction and a situation in which particular stakeholders wield more power than others.

Authors:
Siddharth Hande, Kavya Balaraman
This article is part of a series on informal waste.

Selling in the dark | Commonalities between the waste and agricultural markets

In the agricultural sector, this asymmetry manifests itself in a variety of ways. In terms of structure, the industry is comprised of farmers who produce crops, traders and middlemen who aggregate, wholesalers who bid for the produce aggregated by the traders, and eventually, consumers. Buying and selling of produce takes place at specified neighborhood markets, or ‘mandis’ and these are largely dominated by traders.

In general, farmers at the bottom of the supply chain are completely dependent on these traders to push their wares to consumers. They are particularly disadvantaged because of fewer opportunities of what is called ‘spatial arbitrage’; since they are not mobile, they cannot collect cumulative information on current prices and patterns of demand across different markets. This is an expensive operation that is far beyond their capability and as a result, they are unable to make decisions that would maximise their profits

This situation is clearly illustrated in the survey conducted by the NSSO. According to this data, farming households are relatively unaware of government procurement options for crops and crop insurance schemes. They are also far removed from new technologies and guidance from state-run research institutes.

On the other hand, large traders have the capacity to collect this information from different markets, which gives them better bargaining power over the farmers. It also gives them an understanding of how to hike the prices of produce, significantly increasing their mark-up. Besides this, large traders have the advantage of temporal arbitrage; that is, those who have the capital to store large quantities of produce for longer periods of time can also affect market prices in specific localities by doing so. The end result is fairly straightforward: while consumers pay competitive prices for produce, farmers receive only a fraction of the income.

Interestingly, Kabadiwalla Connect’s primary research has shown similar cases of information asymmetry in the waste space. Much like the structuring of the agricultural sector, the informal waste space includes a variety of buyers and sellers along a complicated chain. At the bottom-most level are many are mobile. They  source waste manually from street dumps, landfills and homes. Waste is then passed on to itinerant buyers (who have the added benefit of a vehicle) and stationary scrap-dealers of varying capacities and scales. Finally, waste is routed to recyclers who upcycle it to a product of a much higher value.

The informal waste ecosystem | Lack of information hits the bottom of the supply chain harder.

Predictably, it’s the ragpickers and itinerant buyers who are most disadvantaged because of the lack of information. While they source and salvage waste, they do not have the knowledge or ability to add value to it in any way. On the other hand, scrap-dealers (especially those at the higher end of the chain), are much better equipped to do so. They purchase waste at extraordinarily low prices from ragpickers and then align their management process to better meet industry demands. As you travel up the waste chain, they sort waste into increasingly specialized categories and aggregate it to the extent that will make them maximum profit. They also know to transport waste to geographies where demand is highest. The knowledge of these dynamics is what allows scrap-dealers and wholesalers to push up their revenue while simultaneously paying their suppliers a bare minimum. What results is that players at the base level of the supply chain are highly underpaid – in countries like Nicaragua for example, waste-pickers earn between $1.50 to $2 per day, while in Mexico, the average is around $7 a day. In his paper ‘Waste Picker Cooperatives in Developing Countries’, Martin Medina writes about how waste-pickers in Colombian, Indian and Mexican cities receive only 5 percent of what the recycling industry eventually pays for waste they supply.

Learnings from our primary research

One of the scrap-dealers whom we interviewed is based in MMDA Colony. Most of his competitors work out of rented or makeshift locations and purchase several categories of waste in small quantities. However, he has utilized his financial capability and knowledge to build a more successful enterprise. He invested in a 2400 square foot yard to aggregate material, and chose to specialize in only one category: paper. Rather than source his material from several stakeholders, he worked out contracts with a few printing presses in the city. These presses not only produce vast amounts of waste paper, ensuring a steady supply, but also shred it before handing it over to him, cutting down on the processing procedures he has to implement in his yard. Once the paper is brought to his yard, his staff sort it into super-specialized categories and bale it to save space. The scrap paper is aggregated until it can be sold for the highest price. His monthly revenue is over INR 1,00,000 – several times what an average kabadiwalla would make.

On the other hand, another scrap-dealer whom we spoke to in Kotturpuram had a very different model. He deals with 13 categories of waste, running the gamut from plastic and paper to metals like copper and aluminium. His suppliers are varied and operate in an ad hoc manner, and he has no understanding of the volume game, neglecting to aggregate his waste before selling it. He makes less than INR 10,000 every month.

There have been various attempts at tackling the information asymmetry in the agricultural sector. An interesting model sought to make market information available on a mobile platform, since cellphones are easily accessible in rural parts of the country. However, there are a few factors that limit the efficiency of these systems. For instance, many farmers are unable to bear the cost of using an online or mobile platform, which means that the service has to be free in order to have a wide reach; but on the flipside, services that are not economically self-sustaining also tend to lose support in the long run. Moreover, these systems are not always created and implemented with a good enough understanding of the needs of the farmers.

There don’t seem to have been any highly successful technological interventions tackling information asymmetry in the waste space. However, governments that have lent support to informal waste networks by regularising their functioning have, to an extent, managed to facilitate the free flow of information. In Brazil, for instance, the informal waste sector has been provided with institutional support and organised into unions and cooperatives, making it easier for ragpickers and scrap-dealers to access information collectively. In India, while there are instances of self-organisation within the informal waste sector, we still have a long way to go until there is no exploitation within the ecosystem.

Click here to register for this panel. With the growing awareness of the impact we have on the environment encouraging more people to embrace reuse and repair, we see a rapid increase in organisations and[...] END_OF_DOCUMENT_TOKEN_TO_BE_REPLACED
Sign In