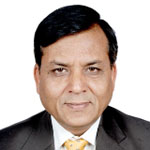 Dr. Vivek Agrawal is the Trustee Secretary of Centre for Development Communication (CDC) which established the Annakshetra Foundation. He is also the Managing Director & CEO of Kanak Resource Management Limited (a subsidiary of IL & FS Environment Infrastructure & Services Limited).

Annakshetra collects unused surplus food from ceremonies (which would otherwise be wasted) and makes it available to those in need through a network of volunteers. It is the first organization of its kind in India, which has taken up an initiative called “Zero Food Wastage.” Approximately 100,000 people have benefitted directly by Annakshetra and its network of 1500 donors.

Dr. Agrawal specializes in solid waste management, communication and urban health. He is working for the upliftment of the informal sector which is involved in the collection and transportation of solid waste management. Dr. Agrawal is also the Vice Chairman and Member of Technical Working Group involved in Collection and Transportation of waste, constituted by International Solid Waste Association(ISWA). He received the UN Habitat Scroll of Honour Award 2004 on behalf of CDC, reached semi finals of Schwab Social Entrepreneur of the Year Award and reached the finals of Sankalp Awards 2010. Dr. Agarwal received Post Graduate in Medical Sciences and Bachelor in Mass Communication.

Selling in the dark: Information asymmetry in the informal waste ecosystem

The COVID-19 pandemic, the war in Ukraine, and the changing global economic order are disrupting supply chains of the critical minerals we depend on. The accelerating transition to solar photo-voltaic, electric vehicles, and their battery[...] END_OF_DOCUMENT_TOKEN_TO_BE_REPLACED
Sign In