Models of Inclusion in Informal Waste 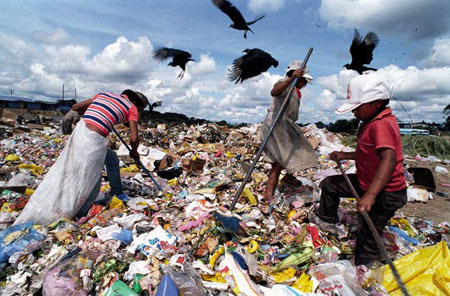 …scavenging is illegal in several urban centres in Colombia, India and the Phillipines, where waste-pickers are often discriminated against because of their perceived association with dirt.

In most cities in the developing world, waste-pickers provide between 50 to 100 percent of waste collection services.

This statistic was published in 2010, in a UN Habitat report, and provides a lot of food for thought. Here is what is essentially a marginalized group – a majority of which is in the lowest income bracket – that is providing a huge service to urban centres across the globe. Moreover, they perform a large chunk of a key municipal responsibility – at no cost to the city whatsoever.

Official attitudes towards informal waste networks vary from city to city, ranging from outright rejection to models of partial incorporation. Martin Medina, one of the key authorities in the field, explains how public policy towards waste-pickers and scrap-dealers is generally reflective of societal attitudes towards them. He loosely categorizes these policies as representing repression, neglect, collusion or stimulation. In the first two categories, perceptions of informal waste workers are generally negative. For instance, scavenging is illegal in several urban centres in Colombia, India and the Phillipines, where waste-pickers are often discriminated against because of their perceived association with dirt. Several African countries, like Senegal and Mali, follow a policy of neglect, neither supporting nor discriminating against shadow waste economies. In some cases, without actively meaning to, municipal trends veer towards modernized, privatized models that indirectly cripple the informal sector.

Author:
Kavya Balaraman
This article is part of a series on informal waste.

Still, there are some governments that do try to leverage the potential of waste pickers. These attempts can sometimes develop into models of collusion, where relationships between officials and informal players are exploitative. For example, over the last five decades, a collusive system of political clientelism has developed in Mexico. Here, complex and exploitative networks exist between waste-pickers and local leaders or caciques, who also have strong ties with political figures.

Some cities that truly understand the potential of the informal waste sector. To an extent, this attitude is born out of the acknowledgement that American and European waste management technologies are rarely sustainable in the developing world. Because of their experience and efficiency in waste collection and recycling, informal players are viewed as valuable resources to municipal authorities. These cities follow a fourth policy —what Medina describes as stimulation—wherein they actively support informal sector participation in urban waste management models. They do this in different ways: legalizing scavenging or encouraging waste-pickers to organize themselves into cooperatives, for instance. Waste-pickers could also be integrated into the system through a formal contract or the formation of public-private partnership models.

For a municipal authority, the prospect of creating a waste management model that integrates informal elements has several pros. Firstly, it helps to create a more efficient system of waste collection and disposal—and consequently cleaner streets. More importantly, it also has ramifications from a public health perspective: waste-pickers who are excluded from formal mechanisms are often forced to salvage waste in landfills and other unhygienic environments. Inclusive approaches allow them to access waste directly from the source.

Efficient models of inclusion also help waste-pickers increase their income by creating a regulatory framework that doesn’t allow exploitation. For instance, when the city of Bogota adopted inclusive policies towards the informal sector, the 790 waste-pickers that were part of the program were able to double their income. Outsourcing work to waste-picker cooperatives can also present a much cheaper option to municipalities. These cooperatives work at a fraction of the price that other private organizations do, since they actually earn an income out of the scrap that they collect. Many private organizations work under tenders that pay them to transport waste to a landfill, after which the municipalities have to incur landfill maintenance costs. Informal workers, on the other hand, divert waste from the landfill and route it to recycling agencies instead.

However, the complexity of the informal sector makes creating such an integrated model a hugely difficult task. The sector itself is fragmented, with different cliques and cooperatives who operate independently. Hierarchies and exploitation within the system benefit larger scrap-dealers, which means that they would be particularly unwilling to submit to a regulatory framework. Since the economy works under the radar, municipalities have very little information about them. Moreover, what is considered to be the ideal scenario – wherein the entire waste-picker community in a city is brought on board as formal waste collectors – is also met by fierce resistance from pre-employed private organizations, who perceive it as a threat to their employment. Something similar happened to Hasirudala, a waste-picker cooperative in Bangalore, who found their members threatened by local contractors as they expanded their services in the city.

Different municipalities have tackled the issue of integration in different ways. Since total integration is problematic, many of them try to create a sort of parallel system within which waste-picker cooperatives can function. Through this, informal communities are given much better access to waste. They are also provided with a more professional framework within which to work and are equipped with uniforms and ID cards – for instance, in the case of SWaCH, a waste-picker cooperative in Pune.

Cities in Latin America have been particularly proactive in terms of incorporating informal elements into their waste management systems. The benefits of these policies have also been making themselves clear. The Buenos Aires municipal corporation, for instance, partnered with a waste-picker cooperative called the Movement of Excluded Workers in 2005. The cooperative had around 2500 members, and the municipality provided them with vehicles to transport waste, a monthly stipend of $209 for each member (in addition to what they earned from selling scrap), as well as health insurance and subsidised childcare.

The government of Brazil has also implemented several inclusion programs. This was largely carried by two pieces of legislation that were passed around a decade ago: one that mandated federal agencies to deliver recyclable materials to waste-picker cooperatives and one that allowed municipalities to end their contracts with commercial suppliers. Cooperatives like COOPAMARE (in São Paulo) and ASMARE (in Belo Horizonte) benefited greatly from these policies; in fact, the city of Belo Horizonte even provided ASMARE with monthly subsidies and infrastructure, as well as opportunities to receive environmental education.

The city of Bogota has also implemented some progressive policies towards waste-pickers—although, having adopted these only in 2013, it was a little late to jump on the bandwagon. Today, waste-pickers in the city are treated at par with commercial collectors and are compensated for their services (apart from what they earned from selling recyclables)..

Closer home, Pune is a great example of a city that has managed to leverage the potential of its informal networks. The Pune municipality has outsourced the responsibility of front-end door-to-door collection of waste to a cooperative called SWaCH, which has around 2300 members. These members service 4,00,000 households in the city. In Chennai, the NGO Consumer Action Group (CAG) has also been working at better incorporating the city’s waste-pickers into a formal system.

While these initiatives have been well-received in political circles, it’s important to remember that they don’t cater to the informal sector as a whole. Often, very limited groups and individuals benefit from them – for instance, in most Latin American cities, each program only provides jobs for about 400 workers each. On the other hand, they lay the foundation for creating a more inclusive, responsibly system which allows the informal waste sector to operate as they deserve.