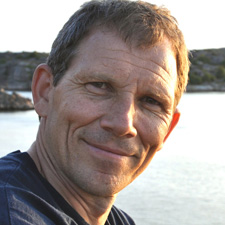 Dr. Christian Zurbrugg received his BSc. and MSc. degree in Geology at the University of Berne, Switzerland. He then worked as a consultant in a geotechnical engineering enterprise before continuing his education with a postgraduate diploma on urban water resources management and water conservation and protection at the Swiss Federal Institute of Technology Zurich (ETHZ) and Eawag. In 1992 he joined ETHZ as a research associate in the Laboratory of Hydraulics, Hydrology and Glaciology and then joined the Department of Civil Engineering at University of British Columbia (UBC, Canada) as flood hydrologist. In early 1998 he joined the Department of Water and Sanitation in Developing Countries (Sandec) at the Swiss Federal Institute of Aquatic Science and Technology (Eawag) as tenure track researcher in the field of solid waste management in developing countries. In 2004 he took over the responsibility as head of department Sandec and since 2015 he is member of the Eawag directorate.

His research interests mainly lie in the interdisciplinary approach of upgrading infrastructure and services in urban areas of low and middle income countries with a special focus on sanitation, solid waste and water. He has led several international programmes and projects and published many scientific articles and book chapters on appropriate technology and enabling environments in low income settings. He serves in many international committees, task forces and juries, and as Head of Sandec obtained the IWA Development Solutions Award for Science in recognition of outstanding innovation or contribution to science which has led to demonstrable uptake, impact or influence at national, regional or international levels in low and middle income countries.

The COVID-19 pandemic, the war in Ukraine, and the changing global economic order are disrupting supply chains of the critical minerals we depend on. The accelerating transition to solar photo-voltaic, electric vehicles, and their battery[...] END_OF_DOCUMENT_TOKEN_TO_BE_REPLACED
Sign In