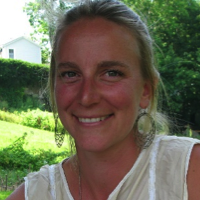 Abby Barrows is a Marine Research Scientist at Adventurers and Scientists for Conservation. She grew up on an island in Maine with the ocean as her playground. A passion for travel brought her to the University of Tasmania, where she earned a degree in Zoology with a focus on Marine Biology.

After mapping the canopy of old-growth temperate rainforest and trapping Tasmanian devils, Abby designed and managed a groundbreaking study of seahorse diversity, distribution and trade in Papua New Guinea, publishing two academic papers on the research. She has traveled the South Pacific by boat, trekked the Himalaya, explored the Middle East, researched sea turtles in Uruguay and Costa Rica, dived Mediterranean wrecks, rehabilitated big cats in the Amazon, and worked aboard a schooner in New England and the Canadian Maritimes. She saw one thing in common everywhere: plastic pollution.

Abby has directed microplastics research since 2012, initiating the first baseline data map of microplastic pollution distribution in Maine. She used this research to help push through plastic reduction legislation. She now manages a lab where she processes and analyzes ASC’s international water samples.

For many years we have measured the performance of waste management systems and services through weight-based targets and metrics (%recycled or % diverted from landfill etc.). Still, more recently, there have been attempts to help[...] END_OF_DOCUMENT_TOKEN_TO_BE_REPLACED
Sign In